Thanks for all the comments we received on this website and on our partners’ websites! I tried to arrange to main points in form of a Dialogue Map. Here it is (click image for larger view): 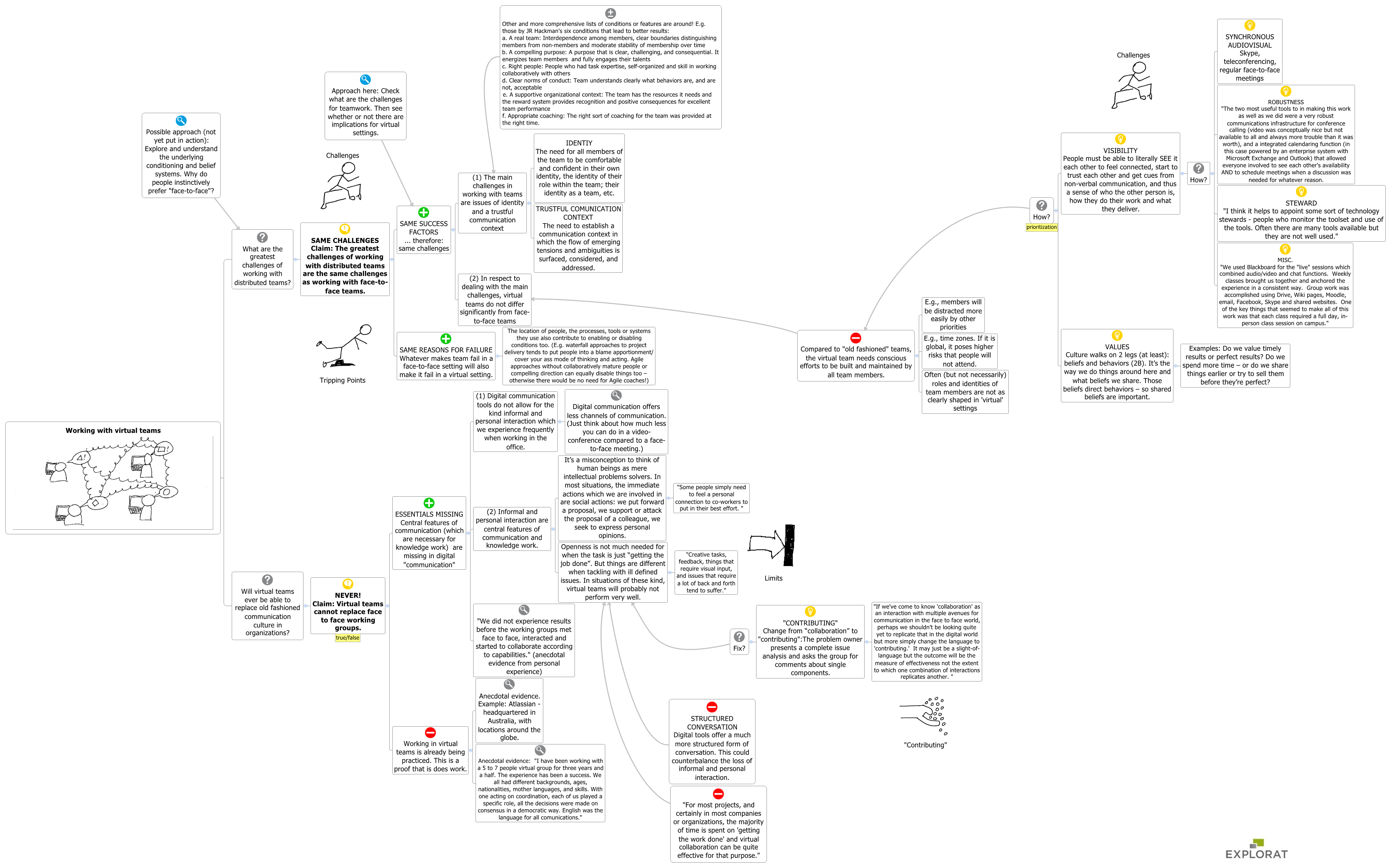 I also prepared a version of the map for printout (PDF-Zip) on DIN A 4: here.

Just a few remarks. – This is how you engage with the map: Light bulbs represent proposals for action. Proposals can be chosen or prioritized. Exclamation marks represent claims and hypothesis. These can be discussed in terms of true and false. Plus and minus are arguments that support/defeat a proposal or claim. A minus following upon a minus is a rebuttal – in other words, it serves to support the initial claim or proposal. All the points represent just the arguments that I have collected from the comments. You might want to challenge some of them (adding more minuses to the map) or you might want to add or ask for further evidence.

These I identified as main issues of the discussion:

Limits: Where virtual collaboration does not work at all

Let’s start with the question of optimization and minimal standards. What I found interesting is that the way the commentators approached these questions revealed different methods (which could be applied more systematically if one wanted to deal with the topic more systematically). One method used to search for success-factors for virtual teamwork was to look at established checklists of either minimum standards or teamwork-enabling factors. Another method would be to do field research in order to find out why people could have reservations regarding virtual work environments. (It would be interesting to actually try this out.)

Where are the main points of discussion? Significant disagreement is to found in respect to the question if problems associated with virtual teamwork are in any way different to those experienced within face-to-face meeting (and thus need special treatment). Commentators have not so much disagreed openly about the ingredients of good teamwork (although different points were mentioned), but rather concerning the issue if these ingredients have to be handled differently in a digital context. In other words: one reason why “virtual” might be different is that the conditions for good teamwork have to be created in virtual environments by others means than they are created in face-to-face environments. Another source of disagreement was whether or not there are really certain situations where virtual teamwork is not an option at all.

Opinions also differ in respect to priority of the issues. Priority can mean many things, though: it can stand for

Thus, different priority was assigned to

A smaller point that somehow struck me was an observation by one commentator that I dubbed “Robustness”:

„The two most useful tools to in making this work as well as we did were a very robust communications infrastructure for conference calling (video was conceptually nice but not available to all and always more trouble than it was worth), and a integrated calendaring function (in this case powered by an enterprise system with Microsoft Exchange and Outlook) that allowed everyone involved to see each other’s availability AND to schedule meetings when a discussion was needed for whatever reason.”

My own impression from personal experience is that down-to-the earth features such as described in these sentences can be really game-changing. There also some more of small observations of this kind in the map that might be interesting to check out.

What also stroke me was that most commentators do not wish to differentiate between different collaboration settings or aims of collaboration. From my point of view, this should be essential. If collaboration serves the purpose of generating good decisions in terms of close-to-the-truth judgments, then variety and dissent should be a prominent design feature of collaboration. If, on the other hand, the goal is consensus then a quite different is needed. Still other goals are workload distribution or division of labor according to expertise. I would not expect that even on a general level guidelines for successful virtual collaboration can be found that are not taking these distinction into consideration.

One last point I want to stress belongs to the issue “Features of virtual teamwork which face-to-face teamwork doesn’t offer”. This point is expressed by the following comment:

„If we’ve come to know ‚collaboration‘ as an interaction with multiple avenues for communication in the face to face world, perhaps we shouldn’t be looking quite yet to replicate that in the digital world but more simply change the language to ‚contributing.‘ It may just be a slight-of-language but the outcome will be the measure of effectiveness not the extent to which one combination of interactions replicates another. „

I think this describes neatly what can be observed in many virtual environments. There is some interaction between participants. But more often, people are willing to contribute ideas, opinion and expertise without to expect immediate feedback. In terms of problem solving, these contributions can very helpful. To me, the comments that we received on “virtual teamwork” are much richer and more helpful than what I had found before in the literature and in the web. I would not call the process of writing and receiving comments on that topic “collaboration”. But surely people have been contributing in a very helpful way. Thank you again!